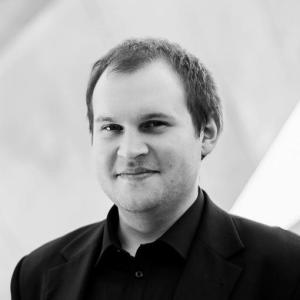 Wojciech Jeliński, graduated from the I. J. Paderewski Academy of Music in Poznań with honours in the class of dr Maciej Łakomy, and the prestigious Hochschule für Musik Hanns Eisler in Berlin in the class of professor Christhar Gössling, who had been a trombonist of the Berlin Philharmonic Orchestra for many years. In 2016 he was granted a scholarship from the Orchester Akademie Der Berliner Philharmoniker in the class of prof. Olaf Otto.

Wojciech Jeliński has played numerous concerts at various prestigious festivals, both national (among others, at the International Festival of Modern Music Poznańska Wiosna Muzyczna, the Muzyka w Starym Krakowie Festival, the concert of the laureates of the Music Competition of the 20th and 21st Century Music in the W. Lutosławski Concert Studio of the Polish Radio in Warsaw, the Witold Szalonek in memoriam concert in Katowice, organized by Polskie Wydawnictwo Muzyczne), as well as international (among others, in the Czech Republic - Vinyl in Prague and in Brno; in Germany- Mikromusik ? Festival experimenteller musik und sound art in Berlin; in Hochschule für Musik Hanns Eisler in Berlin, and in Hoschschule für Musik und Theater in Roztok; in Austria - Marathon V-Festival for young contemporary music in Vienna; in Ireland - Zooming Irland in Dublin, in Estonia - Estonian Music Days in Tallin).

Wojciech Jeliński is an assistant at the Department of Wind Instruments at I. J. Paderewski Academy of Music in Poznań. He specialises in 20th and 21st century music, and he is frequently the first performer of works of contemporary composers such as Ewa Fabiańska-Jelińska, Artur Kroschel, Zbigniew Kozub, and Reinhard Karger. In spite of his young age, he has already recorded several albums, also as a soloist with the Tutta Forza Orchestra from Gdańsk, conducted by Rafał Kłoczko; I. J. Paderewski Symphonic Orchestra in Poznań, and Norddeutsche Philharmonie Rostock conducted by Wojciech Rajski.